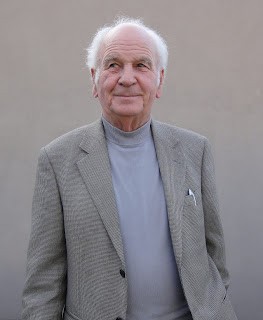 ... is a true Saanich Star, dedicating most of his life to this gorgeous community we all call home. For many farmers, he has been their champion.

His interest in politics is two-fold. His family was political and he showed a personal interest as well. In fact he prefers when the NDP was called the CCF. He joined the party just as they were changing their name.

As an electrician for 28 years he was a member of his local union. It wasn’t until 1988 that he began his journey into civic politics. He attended many council meetings and decided to run in 1990. Afters 3 recounts, he was elected by 28 votes.

He went on to serve 18 years as a Saanich Councilor. During this time he served on the water board for 18 years pushing for major changes. Bob’s role was pivotal in raising the Sooke dam. He went on to serve Deputy Chair of what became CRD Water, and while there succeeded in getting an agricultural water rate passed - which makes a great difference to farmers.

Accountability was a big issue for Bob. He campaigned for direct election of Saanich’s CRD Directors, to end the practise of having the Mayor and his slate designate who would serve. Saanich became the first municipality under the Charter to give citizens a direct choice of regional district directors. Victoria and other municipalities now follow the Saanich model.

Although he is no longer involved in politics, he still holds many visions for Saanich. Affordable housing and rethinking the sewer system are top on his list. Transportation issues are key to many residents but Bob feels that we need to take a slow and thoughtful approach to this heated issue. Perhaps Light Rail is not the answer we need right now. Not to mention the heavy costs involved.

We asked Mr. Gillespie what he thought of the deer issue. “The Deer have always been around, but it wasn’t until we started logging so heavily and clear-cutting the forests that the deer started to move further and further into urban containment”. He does feel that some thinning of the population would be a benefit to farmers.

Mr. Gillespie is a Saanich Star and then some. He brought a much needed transparency to municipal politics in the Capital region and to this we will be forever grateful.